Bees, Pesticides and the Activist Hive 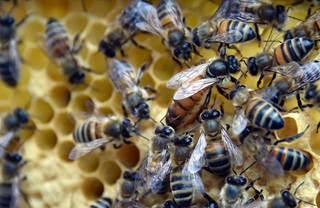 A European court has a chance to weigh whether biased science can justify a costly chemical ban.

A pesticides ban in Europe could soon be overturned on the grounds that it was based on unreliable data. Meanwhile, revelations that one of the scientists behind the ban was also involved with a nongovernmental organization that campaigns against pesticides continue to undermine the ban’s integrity.

Two European chemical companies, Bayer and Syngenta, appeared before the European Court of Justice this week to argue that the European Union should revoke a ban on neonicotinoid pesticides. “Neonics,” as these sprays are known, were introduced in the 1990s as a safer, greener alternative.

One of the advantages of neonics is that they can be used as a seed “dressing,” so that crop plants are protected from birth and need less or no spraying later. They only affect those insects that eat the crop, not innocent bystanders.

Though green activist groups claim neonics devastate bee populations, there remains much debate over how much neonic residue gets into the pollen that bees consume. But the fact remains that there has been no “bee-pocalypse.” In Europe and North America, honeybee numbers are higher today than they were two decades ago when neonics were first introduced.

As for wild bees, a 2015 study in Nature found that only a tiny fraction of wild-bee species pollinate crops. These bees, which come into the most-direct contact with neonics, are thriving.

The real danger lurks elsewhere. The French Ministry of Agriculture recently concluded that diseases, bad beekeeping and famine are the main causes of bee mortality. Pesticides play only a minor part. France’s final court of appeals in civil and criminal matters would agree. In a ruling last month, the Court of Cassation found that no causal connection has been established between the neonic Imidacloprid and bee mortality.

Such findings are in stark contrast to the recommendations in the draft Bee Guidance Document (BGD), a paper prepared by the European Food Safety Authority (EFSA) and the scientific basis of the 2013 neonic ban. But the BGD’s methodology also raises many questions. It ruled out large-scale field studies and forced regulators to rely on lab studies mostly using unrealistically high doses of neonics. Acceptable field studies had to demonstrate with 95% statistical confidence that a neonic would have no more than a 7% effect on the number of bees within a hive, even though bee numbers can fluctuate by twice as much just from cold weather. Field studies were also required to cover 448 square kilometers to meet the BGD’s conditions. Each test field had to be 2 kilometers from every other test field, other crops, orchards and even wildflowers.

No one has figured out how to meet these specifications. Meanwhile, some 18 major field studies and nine review articles published over the past 10 years have overwhelmingly showed that under realistic conditions, neonics have no effect on bees at the hive level.

It’s as if the EFSA’s standard of evidence was purposely set so high as to preclude evidence of neonic safety.

David Zaruk, an investigative journalist who blogs as the Risk Monger, may have discovered how this happened. He noticed that although the EFSA working group that prepared the BGD had removed all scientists affiliated with industry-funded research during the preparatory work, it retained several activists among its five final members. One of them was Gérard Arnold, at the time also listed as the scientific coordinator at Apimondia, a beekeeper lobbying group.

When Mr. Zaruk asked the EFSA about this, he writes that the head of EFSA’s legal department agreed that if Mr. Arnold had been working with Apimondia at the same time, this would have been a serious breach of ethics. But Mr. Arnold had assured them that he was not, so the EFSA was willing to overlook an accusation that he was chairing an antipesticide working group for an NGO.

What this doesn’t explain, however, is why, after Mr. Zaruk started making his inquiries, every reference to Mr. Arnold’s work with Apimondia during his EFSA years started disappearing from the internet. When I asked Mr. Arnold about this, he said his work with Apimondia had ended before he started working with EFSA and the Apimondia website had simply been out of date. But given Mr. Arnold’s known antipesticide activism, there was still at best a conflict of interest.

Brussels entrusted a known antipesticide activist with the task of preparing what was supposed to be an objective report on the testing procedures of pesticides. Instead, the EFSA working group, which included Mr. Arnold, resulted in a ban that contradicts scientific evidence and has devastated European farmers. The total cost of the neonic ban has been estimated at some €900 million ($954.1 million) a year for oilseed rape alone. It would seem incumbent on the EFSA to at least perform a thorough investigation.

The EFSA has so far resisted calls for a review and re-examination of the deeply flawed process that resulted in the ban, but the exclusion of evidence under the BGD is one of the central arguments presented to the European Court of Justice this week. The judges there may well take a more objective and science-based view.

Mr. Ridley is a columnist for the Times (U.K.), a member of the House of Lords and the author of “The Evolution of Everything.”